Thoughts on my completed WW2 solo-campaign

Here are a few thoughts about what worked and didn't in my WW2 solo campaign which I have now finished, or maybe I should say lost. 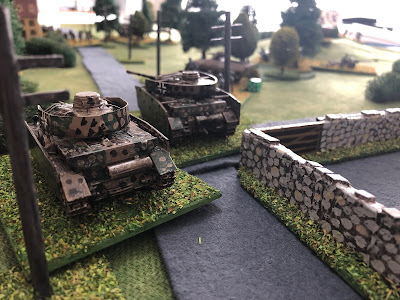 A quick reminder about the campaign that used the chapter "Panzer Grenadiers vs. Guards" from "War Game Campaigns" by Donald Featherstone as inspiration and guide. During the course of the campaign Panzer Grenadier forces are trying to push southwards attempting to breakout into more open country.
Breaking up the original map into squares each representing a tabletop worked well as it helped to create a point to point map which allowed the Panzer Grenadier forces to be simply moved from one point to another based upon a dice roll. 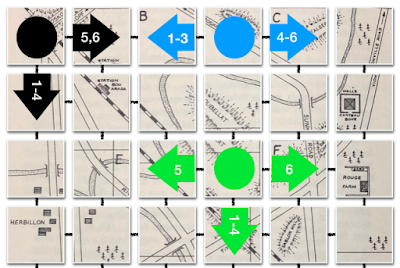 The dice generated moves were very simple and worked well. Details can be found here. During the campaign there were situations where the advancing Panzer Grenadier units had a Guards unit on their flank, then on a 1-4 they attacked the flanking unit or 5-6 they pushed on southwards. This approach occasionally produced the odd result which I put this down to fog or war.

The campaign produced a 13 tabletop games and good number of them were asymmetrical games, requiring a side to make a fighting withdrawal or not be reckless with attacks, to preserve units so they could continue in the campaign. Units which were eliminated in the tabletop game were removed from the campaign as being no longer being combat effective, while units with losses were returned to the campaign at full strength. The assumption was they were able to reorganised and there were a level of reserves or leftovers from eliminated units to make them effective again. I chose this approach as I did not want to keep track of unit's strengths during the campaign. Although I did ticking off platoon loses on the infantry company counter.

I am not totally sure as to why I chose to be the defender rather than the attacker. It may have been the way I read the chapter, anyway I just automatically took to the defender's role.

Having decided to be the defender I then added a few additional units to the attacking forces to make up for any deficiencies with the dice decided campaign moves and random positioning of hidden units. (Note - given I lost the campaign this could be considered a mistake or an overestimation of my wargaming abilities) 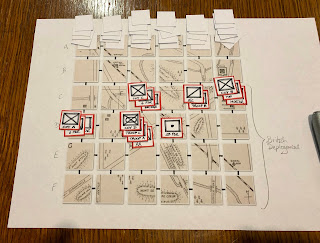 The number of games (13) was about right and I was happy for the campaign to wrap up. If it had gone on longer I suspect my interest would have waned. The small scale of the games themselves suited me well, taking about one hour to setup and play.

One area of the campaign rules I would definitely change was how the orders were actioned. Having the Guards make their orders before dicing for the Panzer Grenadier movement worked well. My error was not making the movement simultaneous. What happened was the German moves were applied and actions were fought where opposing units are in the same map square, then the Guards moves were applied. This often meant the guards moves were not always carried out due to the result of tabletop actions. I cannot remember the reasons why I complicated the campaign moves, but simultaneous moves would have been a simpler approach.

Would I refight the campaign reversing roles and play attacker? Yes, but I would reduce the size of the attacking force and would have to decide to randomise were the defender stands or makes a fighting withdrawal.

Anyway these are my thoughts looking back at the campaign. The next post will cover off the rules used.